What’s the Difference Between Indy, Formula One, and NASCAR? 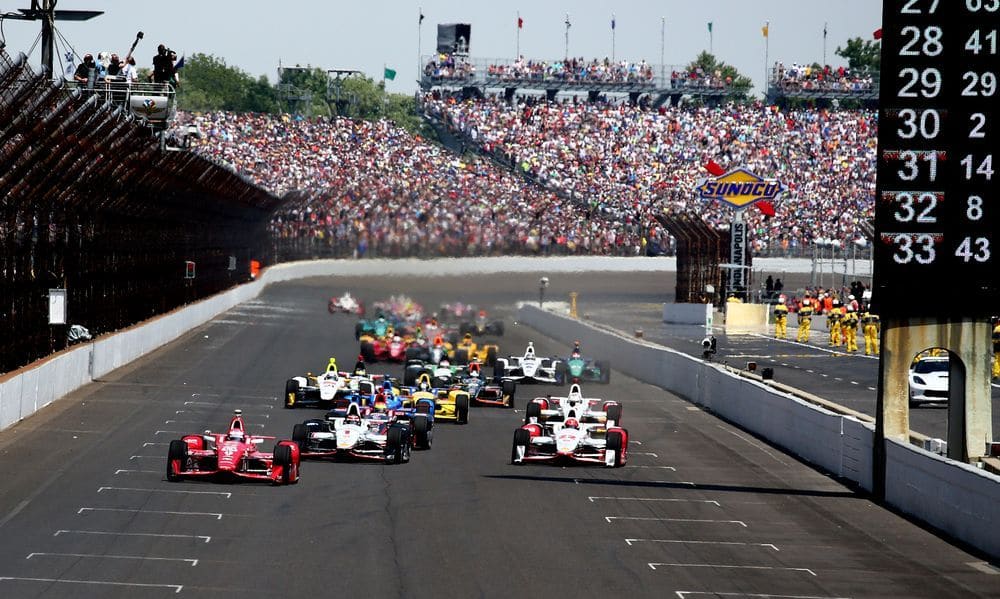 They all seem to have the same basic concept – a grouping of cars circle around a track as fans look on in anticipation for that checkered flag to drop; but for there to be three different types of nationally and internationally recognized races, there must be something different about them. Fundamentally, the races are generally the same, requiring a driver to cross the finish line before anyone else.

It’s clear to tell just by watching IndyCar, Formula One, and NASCAR that there’s a clear distinction between the three. Visually, there are a host of differences that can be immediately pointed out between NASCAR and the other two variations. Then, of course, there are the rules. No two types of racing have the same set of regulations, especially when it comes to the vehicles and their inner workings.

While the rules may have differences, however, the biggest variation between the three comes in with the vehicles being driven. 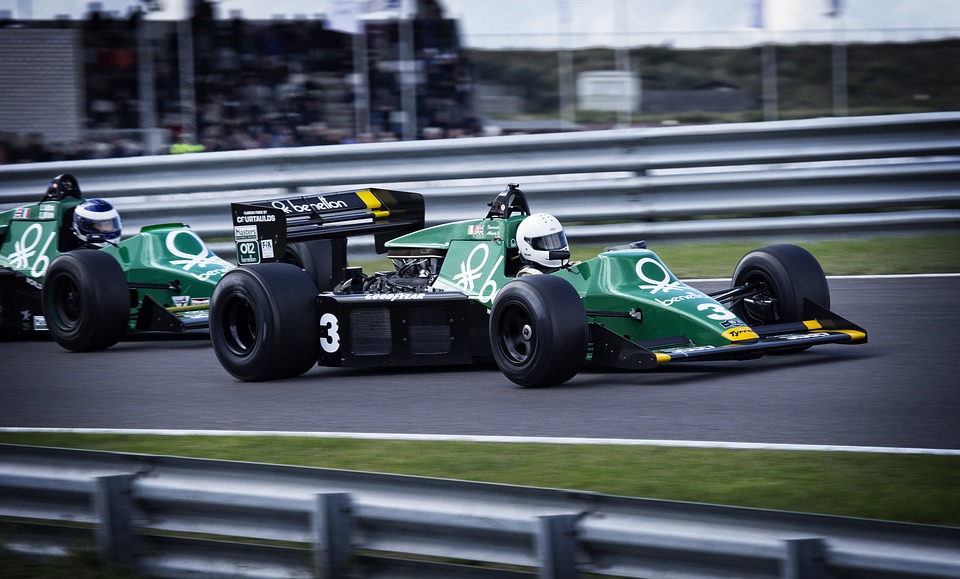 Beyond their physical appearance, the vehicles for IndyCar, Formula One, and NASCAR races differ quite a bit on the inside, too. It’s clear from looking at the three types of cars lined up together that NASCAR differs the most from Indy and F1 cars.

While the F1 and Indy cars feature open wheels and an open cockpit, NASCAR drivers are enclosed in a sedan-styled vehicle. It’s also the heaviest of the three, averaging over 3,250 lbs (1,474 kg) compared to just over 1,500 lbs (680 kg) for F1 and IndyCar.

The increased weight is carried by a 5.86-liter V-8 engine, whereas the lighter F1 and Indy cars are fueled by a 1.6-liter V-6 and 2.2-liter V-6, respectively. Separating the F1 chassis from the other two forms of racing is the fact that the team is responsible for designing and building the car from the ground up.

If it’s top speeds you’re looking for, each vehicle tops out over 200 mph (321 kmh), but the IndyCar is known for averaging at around 235 mph (378 kmh). Both F1 and IndyCar are equipped with a push-to-pass system, an engageable system that gives the car a quick boost of speed, which can be used ten times per race. 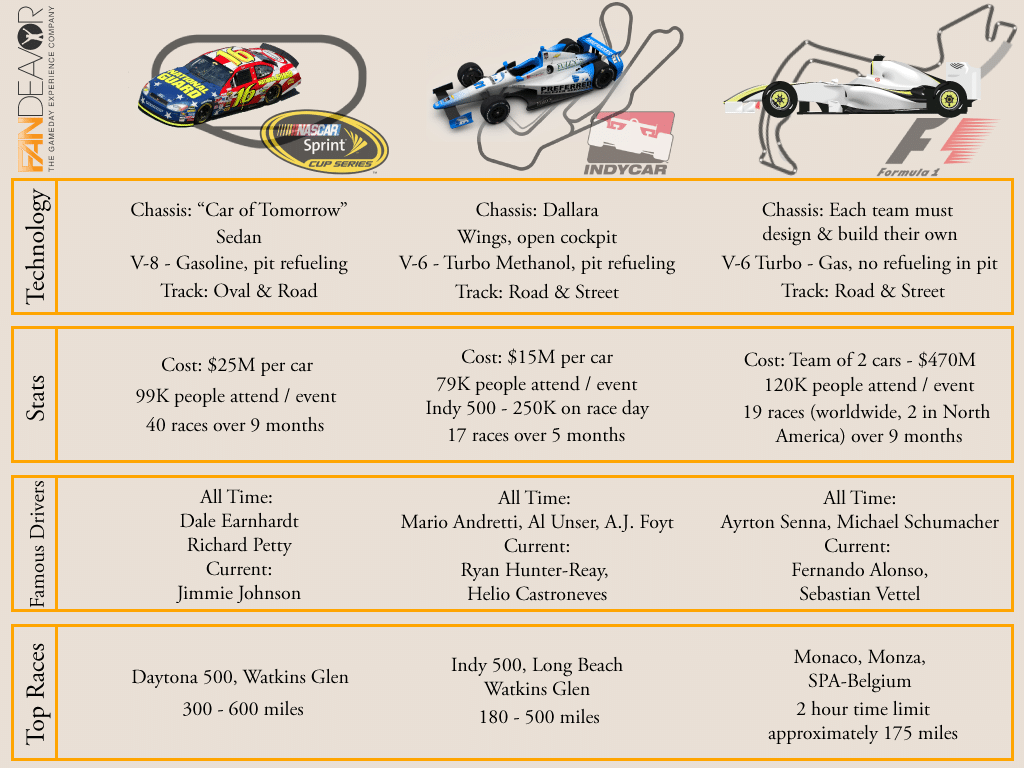 Looking beyond the vehicles, there are some clear differences in the way the races unfold, as well. In terms of length, the shortest of the three is the Formula One, which can take less than two hours to complete. The longest of them, the NASCAR race, can take just under four hours to complete and cover over 330 laps while Formula One and IndyCar races, like the Indianapolis 500, can average around 200 laps.

Speaking on race times, F1 races are generally timed and end after 2 hours regardless of how many laps have been completed while NASCAR races go until the checkered flag flies on the final lap. IndyCar races can be slapped with a time limit, though it may change based on track conditions and projected weather.

When it comes to the start of the race, for an F1 circuit, you’ll want to be in your seat before the race starts. Unlike NASCAR and IndyCar, F1 regulations state that races start immediately while the former have a series of warm-up laps before the green flag flies.

If you’re looking for longevity out of the race season, you’re probably going to want to follow NASCAR as it typically features more races per season. Since 2001, the Cup Series has been comprised of over 36 races compared to F1’s Grand Prix series of 20 in 2017 and IndyCar’s 17. Winning a series across all three racing platforms is based on a point system, and while the systems follow the same fundamental basis, there are slight deviations.

In NASCAR, the first-place finisher is awarded 40 points while in F1 and IndyCar, the top total awarded is 25 and 50, respectively. Drivers in an F1 Grand Prix are only awarded half points if they only complete less than 75% of the race’s distance and are awarded no points if less than two laps were completed. In the IndyCar series, an additional point is handed out to drivers that lead at least one lap and two points for the driver that leads the most laps.

Really, the best way to see the difference is to watch them in action. Book your tickets to the Canada Grand Prix today to see the F1 vehicles dominate the Cirquit Gilles-Villeneuve.

If you travel the world and ask a person from Europe who their favorite NASCAR driver is, they may look at you like you’re crazy. It’s not because they hate NASCAR, it’s more likely that they have no idea who drives for it. That’s because NASCAR, much like IndyCar, is only an American racing event. Of the three different types of races, Formula One is the only one that takes things over series.

Over the course of its racing schedule, Formula One Grand Prix races can take place everywhere from Germany to Canada to Texas. NASCAR and IndyCar are localized to the United States and, even at that, are arguably more popular in the south than any other region in the nation.